“I don’t really understand his decisions and choices. It was weird for him choosing to play despite the pain, but he really gave all he had. He gave his best.” – Roger Federer, on Rafael Nadal playing at the Swiss Indoors, Basel, upon recovery from a wrist injury, but with appendicitis. 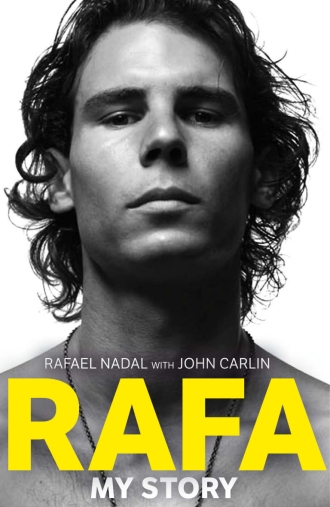 Rafa, the book, is moulded around the 2008 Wimbledon final against Roger Federer. As for how close that match was, how thrilling, I can only tell you that as I watched it Live, my sleep-deprived young heart nearly failed. In Spain, Wimbledon was not a tournament that they wanted their heroes to go after. For the Spanish, Roland Garros was Sanctum Sanctorum, Davis Cup was their Moksha. But they didn’t see that this young man called Rafael from Mallorca would one day stand to be a serious contender of the Championship, not once but more than three times; and each time, the matches were juicy, adding to his glory.

Rafa is an awfully contradictory person. He is terrible at making decisions off court, but he nears perfection on court. He cannot function without his family off court, but will do everything in his power to isolate himself from reality and people, in the moments before a match begins in a bizarre ritual (during which he bellows “Vamos! Vamos!” in the changing room; and sprints up and down the cramped space). He works out in the gym with crazy intensity (“each and every time” – this is drilled into you by the time you finish one-third of the book), but he cheats on his diet by eating chocolate cake (his uncle, Toni Nadal, gives him hell for it).

Speaking of hell, Rafa’s training regimen is hell. It is so intense that the hard work he puts into it is relied on more than his talent, during a match. This insane hard work gets to him eventually, when injuries surface. He plays through pain, and he says so in the book in a disturbingly casual fashion. With a note of anguish, though, he says: “being a professional sportsperson is not healthy.”

The injury department is overcrowded. He has a rare condition in his left foot which forces him to “kill” the foot before he goes to play, because the pain is too great if he does not. Due to this foot condition, the sole of his shoes is an on-going experiment, so as to soften the blow his foot takes; and due to this continuous change in shoe sole shape, other parts of his body suffer injuries (his knee and back). But the guys who treat him make him invincible, despite these bodily failings and his mind makes him the Goliath on court. The book gives you an insight of this. In my opinion, the tenor of the chapters that explain and analyse Rafa’s moves on court at tough situations is the most captivating part of the book.

His team is close knit and is very close to Rafa. He is a person who simply cannot live away from his family and team (which he treats like family) for too long. Rafa’s biggest strengths are his parents, his team of physicians and friends and most importantly, Uncle Toni (he’s ruthless, partial against his nephew, crazy about his nephew’s constant improvement (constant vigilance!), and is often unreasonably critical of his nephew. But he’s immensely loved by this tennis great).

The book shows you how Rafa is a hard working, dedicated, and supremely disciplined tennis player. His modesty is explained the Mallorcan way in the book. His success is attributed to the Nadal family. This is a book for every sportsperson. It teaches you the best kind of lessons about discipline, perseverance, humility, love and hard work.